Three brown bananas sat on my counter last week staring at me. Brown bananas equals banana bread which is a family favorite; however no matter how many recipes I try it never tastes as good as Jerry’s banana bread or so I’m told by the kids and Bubba.

Jerry is my grandmother. I was the first grandchild and no matter how hard I tried I could not say Grandma. Jerry came out instead; family, friends and acquaintances have called her Jerry ever since. She is a great cook. As a kid, barely able to see over the counter, I watched her hands make everything from crème puffs and blueberry buckle to lobster salad and Christmas turkeys. Her thin, wrinkled hands with short nails that were never painted moved quickly with the ingredients. She was a magician and I loved watching her.

She doesn’t cook as mush as she did but she stills makes banana bread, usually at my daughter’s request. C claims it is the best banana bread ever and I agree. It is dam good! I called her the other day for the recipe which she gladly gave me. I made the bread with 2 changes: less sugar and some whole wheat flour. C told me it is not as good as Jerry’s. At least she is honest! I thought it tasted good but not as good. Her magical way with food is real and I can’t replicate it, but I’ll keep trying! 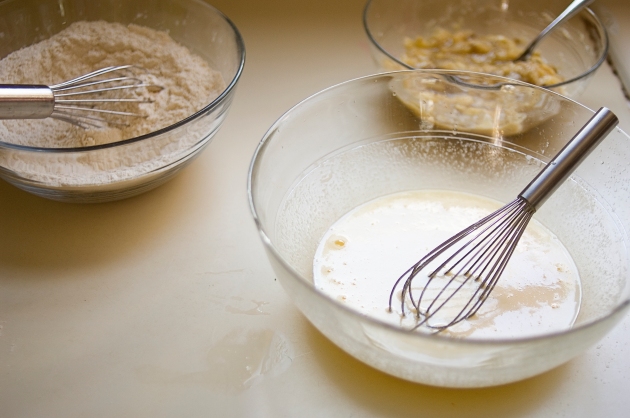 I used 1 cup of whole wheat flour instead of 2 cups of all-purpose flour to add a bit nuttiness and health to the bread. I also used 3/4 cups of sugar instead of 1 cup  and it tasted great. C may have liked it more if I kept 1 cup sugar. My girl loves sweets. Also, you will not need a standing mixer or electric mixer for the recipe. Everything is mixed by hand.

Be sure not to over mix the ingredients or you will end up with tough, rubbery bread.

The best part about this bread is the melted butter and cinnamon sugar topping you put on the bread while it is still warm. The topping adds a nice sugary crust which I know is C’s favorite part.

The bread is perfectly moist and tastes great with a cup of coffee. It will last, well wrapped, for up to 5 days.

barely adapted by me

Sift together flours, baking soda and salt in a medium bowl and set aside. In a large bowl, whisk melted butter and sugar until light in color. Whisk in eggs, one at a time. Add dry ingredients to wet and mix until just combined. Be careful not to over mix. Fold in mashed bananas. Pour into greased loaf pan and bake for 50-60 minutes or until a wooden skewer inserted in the middle comes out clean. Place on a wire rack to cool completely and then remove from pan.

While your bread bakes, melt 1 tbsp of butter and prepare cinnamon sugar mixture.

Pour melted butter on still warm bread and sprinkle with cinnamon sugar. Drink with coffee and share with friends!